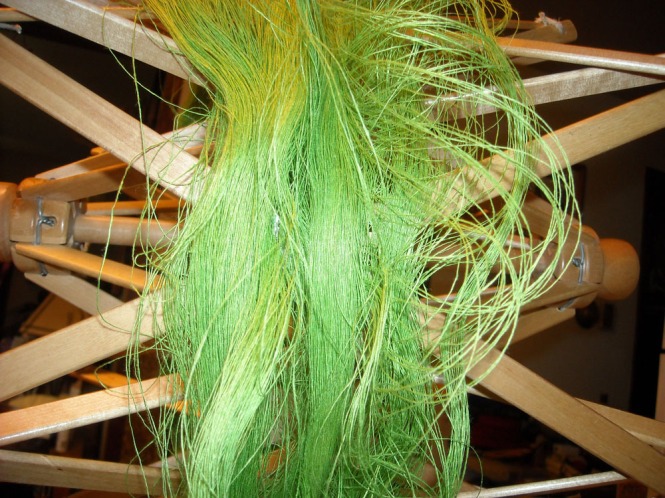 Oh what a tangle this skein of yarn became! This was part of a custom order that I worked on sporadically throughout the summer as I found time between shows. When I placed this thin skein of yarn on the swift to wind it into a cake to use in plying I found that instead of winding off easily onto my ball winder that it kept catching, tangling and sometimes breaking . I finally wound it by hand onto an empty cone. Thankfully the lovely lady was in no big hurry, just wanted her skeins of linen yarn plied to a thickness that she could use to knit.

When we first met to discuss the project, we decided on a workable thickness and that it would be wet plied. We then went about sorting all the lovely colors into groups of three or four skeins, since they were two different gauges, the one almost as fine as sewing thread.

We did meet so she could see and approve of the progress but she wanted to wait to reclaim her yarn all at once. After many more hours than I had originally thought and well over 7000 yds of plied yarn the project is finished! I really want to see the finished items that it will become under an expert knitter’s hands. And best of all I’ve made a new friend.

The finished skeins covered my card table in a single layer, so here are the pictures with some overlap. The one multicolored skein is the uneven yardage from the original plying, plied with a continuous length of two of the finer singles that were left.